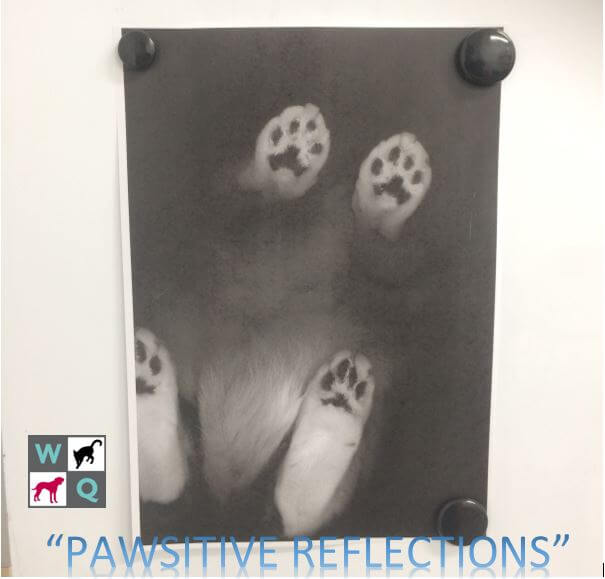 Firstly, a massive thankyou to everyone who voted for me- it’s been so great to finally get the recognition that I so rightly deserve!

I have been sure to make the most of my newfound fame around the clinic! I’ve made sure that the staff give me extra breakfast AND dinner every day haha!

They are loving spoiling me! Nurse Amelia even put up a poster of me on the reception desk with my trophy and sash for everyone to see!

Be reassured, dear readers, I will be working hard and starting early on my campaign for next year…. “Lord Norman from Queensland” won’t stand a chance!! (although I hate to admit it- I think he’s pretty handsom).

In other news around the clinic we have treated some unusual cases this month.

We have treated a dog who had picked up a whole bunch of Ticks down the coast… very unusual for this time of year! The nurses removed 18 of those little suckers off the doggo!! Thank goodness he only had short hair -otherwise he would have needed a dramatic, and very chilly, haircut!

We also had “Koda”, the Kelpie X, who was extremely lucky after not only being hit by a car- but having the car tyre run over her HEAD!! “Koda” was very lucky to survive this and had only managed to break 3 teeth which were later removed under anaesthetic!

As well as these lucky outcomes, we saw an unusual case of Pyometra! Although this condition is quite common in older, undesexed, female dogs and cats- what made this case unusual is that this patient was only 18 months old!!!

Pyometra is a condition where the uterus undergoes hormonal changes, becomes infected and begins to fill with pus. This can be a life-threatening condition if left untreated – much like an Appendicitis! As you can probably imagine, the poor pup was feeling quite unwell but made a full recovery after the infected organ was removed!

Each day is different and exciting at the hospital, you can never be complacent because something will always come up and bite you on the behind!! And this week I was taught a VERY BIG LESSON….I was overseeing the waiting room, resting my derrière on the new photocopier machine when SOMEONE PUSHED THE “GO” BUTTON!!!!

I was not warned about the BLINDING LIGHT that would EXPLODE beneath my paws.

Despite being startled, momentarily blinded, and having my “booty-licious behind” briefly warmed, I regained my composure…… only to be UTTERLY HUMILIATED when they showed me the picture!!!!Thank goodness I had my tail to protect my dignity!!

The staff have named this artwork “Pawsitive Reflections”. And have hung it up for all to see ☹ 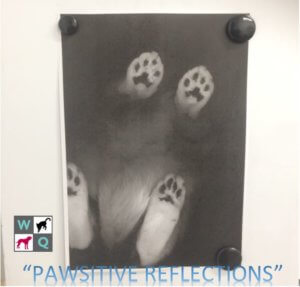